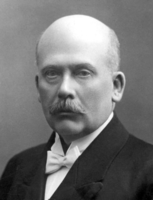 Matyáš Lerch (1860–1922) was renowned for his results in mathematical analysis, number series, theory of functions, particularly the Gamma function and elliptic functions. His work represents more than 200 publications. Despite his exceptional talent and deep commitment, he won a recognition abroad before he got the proper credit in his homeland. His results, particularly appreciated by Ch. Hermite, were acknowledged by the Grand Prix of the French Academy in 1900. In 1986–1906 he got a professorship at the Fribourg University in Switzerland. After he returned home, he was appointed rector of the Technical University in Brno and professor at the Masaryk University in Brno. In 1921 he was elected the member of the Czech Academy of Sciences and Arts.