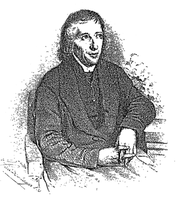 Digitized book collection of the Czech mathematician and philosopher Bernard Placidus Johann Nepomuk Bolzano (1781-1848, Prague). From 1804 to 1817 Bolzano published several important mathematical works. In 1837 his "Wissenschaftslehre" appeared as an attempt to present a complete theory of science and knowledge. Approximately between 1830 and 1840 he worked on his major work "Grössenlehre" (remained unfinished). Around 1920 Martin Jašek discovered in Bolzano’s manuscripts an example of continuous nowhere differentiable functions. Bolzano’s work "Paradoxien des Unendlichen" was published three years after his death. His theories of mathematical infinity anticipated Cantor theory of sets. In addition to his mathematical work, Bolzano was also famous as a philosopher and as a logician.